Sainsbury's/Asda Merger: The Beginning of a New Era in Retail? 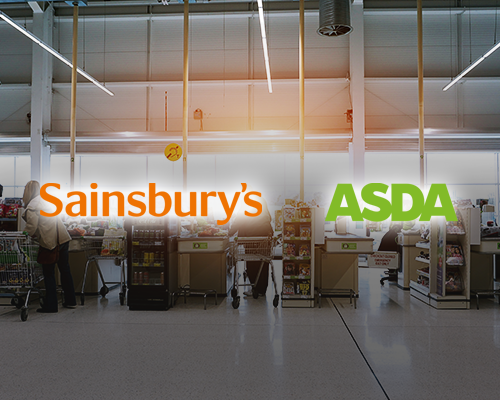 The recent news that British grocery giants Sainsbury’s and Asda are in advanced talks to merge might be one of the biggest retail stories of 2018 so far, sparking a flurry of debate among pundits and retail experts alike. But it’s also not a particularly surprising move.

The likes of Sainsbury’s and Asda have come under increased pressure from all sides over the last few years. Hard discounters such as Lidl and Aldi and online giants including Amazon have made the marketplace incredibly competitive, with costs, convenience and the customer experience all more important than ever.

This has led to the more traditional supermarket retailers having to devise new ways to fight back, and this merger is evidence of that.

The cost savings that will be achieved through this move will enable the yet-to-be-formed group to compete much more effectively, particularly when it comes to competitive pricing. Mike Coupe, CEO of Sainsbury’s has stated that the group should be able to deliver cost savings of 10% across many core lines, which means the biggest winners in this case will be shoppers.

Of course, there will clearly be other advantages. One can easily foresee the benefits of taking the Argos concessions that can currently be found in Sainsbury’s stores and extending them across Asda sites, for instance.

The finer details surrounding the detail are yet to be fleshed out, but one that will have to be considered is the future of the popular Nectar Card loyalty scheme. It’s hard to tell what might happen at this point in time: Asda has traditionally been an EDLP (Everyday Low Price) retailer that has typically shunned traditional loyalty schemes like Nectar, and so it would certainly be surprising to see them adopt it straight away. With the stated intent being to keep the Sainsbury’s and Asda brands separate, we could see Nectar retained as a USP for the Sainsbury’s estate — at least for the short-term.

While this might be a hugely significant story within the retail sector, it is indicative of an emerging industry trend. It’s certainly not the first major merger to have made headlines in the last 12 months, and it’s unlikely to be the last. Tesco and Booker announced plans to join forces late last year, with the deal being completed in March 2018.

As time goes on, we can expect to see the online giants of this world making their first forays into physical retail to continue driving competition, much like Amazon has already done by partnering with Whole Foods. The company’s Amazon GO store in Seattle, Washington, was a stunning glimpse at what modern, digital-first retailers can achieve in the physical space, and if more of them can get this concept right, traditional retailers will have every right to be worried.

Ultimately, as traditional retailers continue to struggle with new ways to drive competitiveness and innovation, we can surely expect to see more consolidation. It’s an effective way of re-utilising space to meet (and ideally exceed) the more experiential demands of modern shoppers, and ultimately drives down costs — an all-too attractive proposition in today’s landscape.